Founded as a humble watch retailer in 1942, Emperor Group has grown and expanded into a diversified conglomerate of businesses that includes Property, Financial Services, Watch and Jewellery, Entertainment & Culture, Hospitality, Digital Media and Home Living. 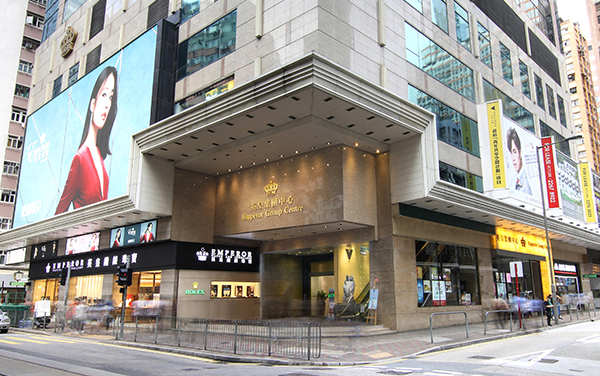 Six companies within the Group are listed on the Main Board of Hong Kong Stock Exchange. The diversified businesses of Emperor Group enable it to become a key player across various industries. Furthermore, the interaction and collaboration among business groups have created synergy, enhanced efficiency, reduced costs and achieved resource-sharing, further improving the competitiveness of the Group. The business groups can reap benefits from the outstanding results or unique potentials of one another, leveraging the advantages to create greater effectiveness collectively. Emperor Group truly treasures this strength. For many years, the Group has cultivated a corporate culture, which emphasizes close synergy among its various businesses. The Group is proud to have a team that comes from different backgrounds and professions yet able to work closely with one another.

Property: Emperor International Holdings Limited (Stock Code: 163) is the flagship listed company of Emperor Group's property business. Established in 1990, we have been constantly expanding our businesses and actively engaged in property investments, property development and hospitality and now owns a diverse portfolio of residential projects, industrial and commercial buildings, shopping malls, street level retail premises, hotels as well as co-working space scattered across Greater China and overseas. Many of them are situated in prime retail locations that include Russell Street of Hong Kong, Chang'an Avenue of Beijing, and Oxford Street of London. The Emperor Group Centre Beijing has been awarded the honor of “6-Star Super A-level Building” by Beijing Central Business District Administration Committee and the “China Golden Landmark Award for Office Buildings”, successfully establishing an image of world-class commercial building.

Financial services: At the end of the 1980s, Hong Kong's economy took off and the market investment trend became more and more popular. The atmosphere prompted the Group to firstly get involved in investment and international financial markets. Emperor Financial Group and Emperor Capital Group were developed one after another.


Emperor Capital Group (stock code: 717), the company listed on the main board of The Stock Exchange of Hong Kong Limited, was established in 1993. The group provides diversified financial products, insurance services, asset management, corporate finance and loans, etc., which can fully cater the different investment needs of individuals, families and enterprises.

Hospitality: Emperor Hotels Group is a brand of superb flexibility and sky-high ideals. Staying in our hotels, all guests will be offered amazing services, fabulous food and unrivalled experience. Being the gold standard when it comes to Asian distinctive hospitality, we now have three hotels in Hong Kong and Macau, and three serviced apartments in Hong Kong, as well as a few others on the way as we expand into the Asia-Pacific region. Each of our hotels has an amiable ambience and world-class amenities, displaying our unwavering commitments to hospitality excellence.

Home Living: Founded in 1975, Ulferts is a retailer of a wide range of exquisite European furniture, with showrooms all over Hong Kong. It is operated under Ulferts International Limited (Stock code: 1711). Besides, Ulferts has diversified its businesses with different brand names. These include Ulfenbo for wholesaling and retailing of mattresses, sofas, and beddings, at.home for providing quality compact furniture and chic style home accessories, as well as Special Project for custom-made furniture projects, providing one-stop furnishing solutions for household and commercial purposes.